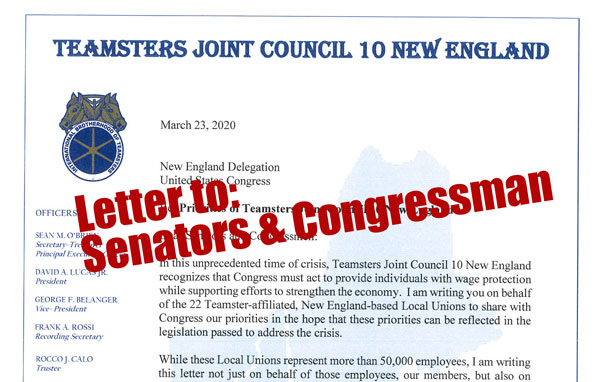 In this unprecedented time of crisis, Teamsters Joint Council 10 New England recognizes that Congress must act to provide individuals with wage protection while supporting efforts to strengthen the economy.  I am writing you on behalf of the 22 Teamster-affiliated, New England-based Local Unions to share with Congress our priorities in the hope that these priorities can be reflected in the legislation passed to address the crisis.

While these Local Unions represent more than 50,000 employees, I am writing this letter not just on behalf of those employees, our members, but also on behalf of all workers and, most particularly, hourly wage earners who, at the risk of over-generalizing, are bearing and will continue to bear disproportionate hardships during this period of extreme unemployment.

Joint Council 10 believes that the first priority needs to be directly and immediately providing funds to workers who currently are on layoff or who will be laid off during the pandemic.  The second priority requires guaranteeing access for unemployed workers to government-sponsored health insurance. To satisfy these priorities, the Joint Council strongly recommends that Congress first provide weekly unemployment benefits at the greater of $600 per week or the average weekly wage of the employee over the preceding 12-month period for at least four months and second to provide to States sufficient funds dedicated to maintain health insurance coverage for any employee who has lost health insurance as a result of a layoff.

Joint Council 10 further believes that other priorities should be ensuring that any financial bailout for any company or industry include the following conditions:

Joint Council 10 lastly believes that another priority should be providing financial support to small businesses that have closed or will close as a result of the pandemic.  This should be contingent on the businesses agreeing to rehire their laid-off workers within fourteen days of the receipt of any financial aid at the same wage rates and with the same benefits that were in place at the time of the layoffs.

Teamsters Joint Council 10 New England and its affiliated Local Unions are confident that the Country will recover from the current crisis and are hopeful that Congress will make certain that all workers will share equally in the benefits that will be the foundation of that recovery.

SMO letter to Senators and Congressmen